With the SkyDrone project, CENERGY developed a software tool to determine under which conditions fuel cells are a viable alternative for drone propulsion.

Nowadays, most of the commercial drones are electric and powered by batteries, with a number of drawbacks. First, the duration of the batteries, and the weight of the batteries that need to be installed to support longer fligth times. Second, the realtively long batteries charging time. A hybrid power supply system composed of fuel cells and batteries can represent a suitable solution. Professional drones have discontinuous operating conditions and they do not work all the flight time at the maximum power. Therefore, fuel cells could work at a constant power while battery overcome the power peaks during the flight. This is why a hybrid system could be an interesting option. Another benefit of using fuel cells is that they need just few minutes to refill the tank if pressurized hydrogen is used.

Our study compared a variety of power systems configurations, namely battery vs. hybrid systems, to identify the optimal solutions for specific drone operation profiles. A detailed process simulation model has been implemented using a light-weight open-air cathode PEM (Polymer Exchange Membrane) fuel cell. The stack power output is chosen according to the mission profile and ranges from 200 W to 1000 W. The results show that, for the considered drone segment, multirotor drones with a weight of 7 kg at take-off, lithium batteries are still the best choice for a time flight shorter than about 1 h. Hybrid systems appear to be a viable alternative for longer flights, with weight savings of more than 30%, or a corresponding range extension. 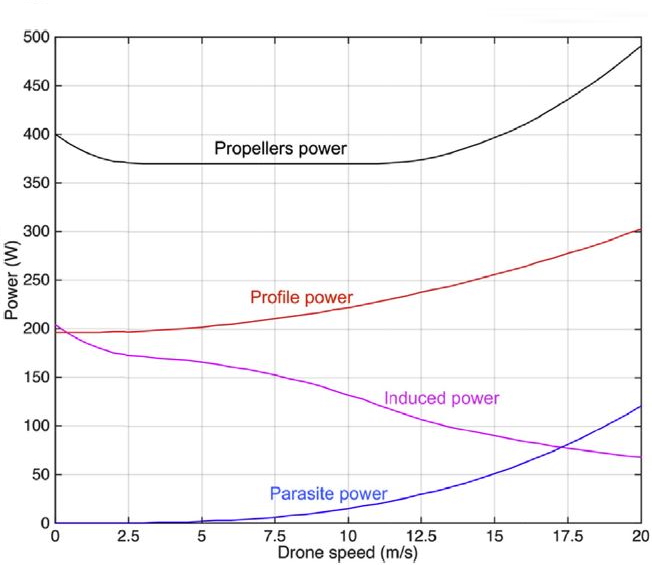